Escaped early on the Friday once Owen was done with Driving lesson. Got up to boat about 5.30pm, still lovely and sunny.  Had some engine concerns as exhaust alarm went off!  Checked EVERY thing all seemed ok so fired her up again and monitored all, but temperature was fine, so disconnected the alarm!   Northerly winds were foretasted so decided to nip down to Appin which gives better protection than the mooring.  Went to the pub, and was let off the mooring charge!  Next morning a Northerly F6 was blowing with a few wavelets!   With that and the concern on the engine, decide to stay put, then eventually decided to nip over to Loch Corrie, where the sun came out. Went for a walk and finished off at the boathouse restaurant balcony in the sun, with drinks ( and eventually got sun burnt) .  Met up with a Dutch couple who were cruising the west coast .   He popped over later that night for drinks – turned out he was a civil engineer, he took Owens details as he had a friend looking for folk – lets see what happens?  Leisurely start next day got back to mooring after lunch so we could get back to sooner to sort front room out. 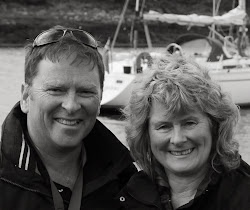